The last match provided a thrilling game for spectators when Liverpool played perhaps their most dominant half of 2019/20, leading with 3-0 in half-time. After a tactical change to a 4-3-1-2 formation from the American Jesse Marsch, Salzburg managed to score 3 goals in a very strong 2nd half performance, but still succumbed to a 4-3 defeat.

Klopp learned his lesson and prepared for what happened in that 2nd half while Marsch tried to approach the game more positively in this fixture, making several adjustments despite continuing with their usual 4-3-1-2 formation. The strong performance from Salzburg continued in this game too, with their vertical play and aggressive pressing creating many dangerous chances.

Straight from the start you could notice the triggers of Salzburg’s pressing-traps mechanism and their approach.

Salzburg held a semi-high midfield pressing approach and invited Liverpool to build-up and circulate possession in order to keep the team compact, preventing space behind the backline for Liverpool’s vertical plays into their lethal speedy attackers.

Salzburg waited for the eventual switch pass from CB to CB as the main trigger to set the trap.

Minamino acted as the #10 in deeper positions, shifting across to control passes between but also man-marked Henderson zonally, when trying to “activate” the trap.

The two centre-forwards had a zonal-responsibility of the half-space, in order to have access to Liverpool’s CB’s and eventual back-passes to Alisson, with cover-shadow pressing forcing keeper to one side.

Like the centre-forwards, the #8’s were also responsible for controlling the half-spaces, in order to access Liverpool’s full-backs and pressing them towards the touchline.

Many of their situations were successful by having a compact structure and quickly and aggressively executing the pressing, allowing them to recover possession several times consequently allowing them to find both Minamino and the forwards in favourable 1v1/2v2 situations vs Liverpool’s CB’s. 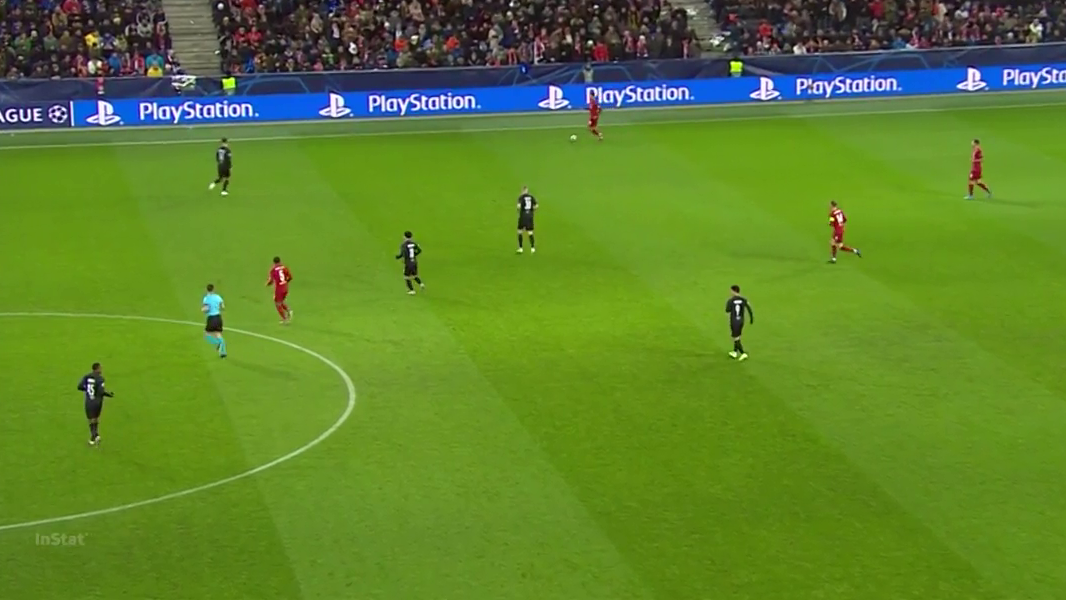 (above)Håland and Hwang controlling the half-spaces(in this sequence they are positioned closer than necessary). We can also see how Szoboszlai is pressuring Trent Alexander-Arnold while preventing cutting of passing lanes into the half-space.

Although Salzburg’s pressing was successfully executed in many situations, Liverpool managed to find different ways to create superiority vs their diamond structure.
Liverpool used positional rotations on the flanks and in the half-space, with their wingers, #8’s and full-backs, in order to create opportunities to find free players/positional superiority. Examples from this game included Salah dropping deeper into the half-space, Trent advancing down the flank and the ball-near #8 moving towards the flank or into space.

In this game Liverpool kept their full-backs deep and wide in early possession phases, in order to drag Salzburg’s #8s wider and thus decreasing their access to the ball. From there, the full-backs were supported by the ball-near #8 creating 2vs1 situations, but had also time to switch play to the ball-far CB or even fullback to fullback switches.

The diamond formation is a formation which creates a “net” of access in pressing situations and almost every potential player can control central spaces. Also, due to the many lines of the formation be, the diamond creates both horizontal & vertical compactness.

To prevent losing horizontal compactness within the team and the access to wide opposing players in case of playing against very fast and wide circulation in possession of an opponent, the #8’s must be able to adjust positions constantly, in order to create enough access but to also anticipate the best moment to apply pressure.

In these situations, the fullback was given the role to leave his “defending line” in order to press the wing-positioned player of Liverpool, trying to prevent the player from advancing further.

This led to situations where Ulmer would pressing very high, allowing Liverpool, excellent in playing vertical passes into the space behind the back-line, to try and play longer balls behind Ulmer to Salah running in-behind, leaving exposed because they weren’t able to push-up as a unit, accordingly because of the threat of Liverpool’s threatening runs in-behind.

These sequences saw Salzburg losing their central compactness. Because of their less-compact structure, the hosts were better prepared to win 2nd balls and to take advantage of the visitors horizontally spaced out back-line(due to Ulmer’s positioning)  and the 2v1 situation on the opposite flank, with Mané & Robertson.

Liverpool’s also formed situational a 3-man back-line, decreasing the effectiveness of Salzburg’s triggers. When closer to the goal, Alisson created the 3rd player with the CB’s splitting wider or Henderson would move diagonally into half-spaces.

This could’ve occurred due to lack of aggressiveness, caused by waiting too long to apply intense pressure(this is of course id also due to the fact that Liverpool forced Salzburg to cover lots of spaces and shift a lot by orienting their ball-circulation towards the flanks). The more the game went on, the more Henderson would move out diagonally, allowing Alexander-Arnold & Robertson to position themselves higher up the flanks.

Comparing Liverpool to other teams, they are great at using cover-shadows to direct passes towards the flanks during midfield pressing, which forces the team to play centrally to areas where Liverpool want to stay compact and execute a “trap” centrally.

View all posts by RedBullHub